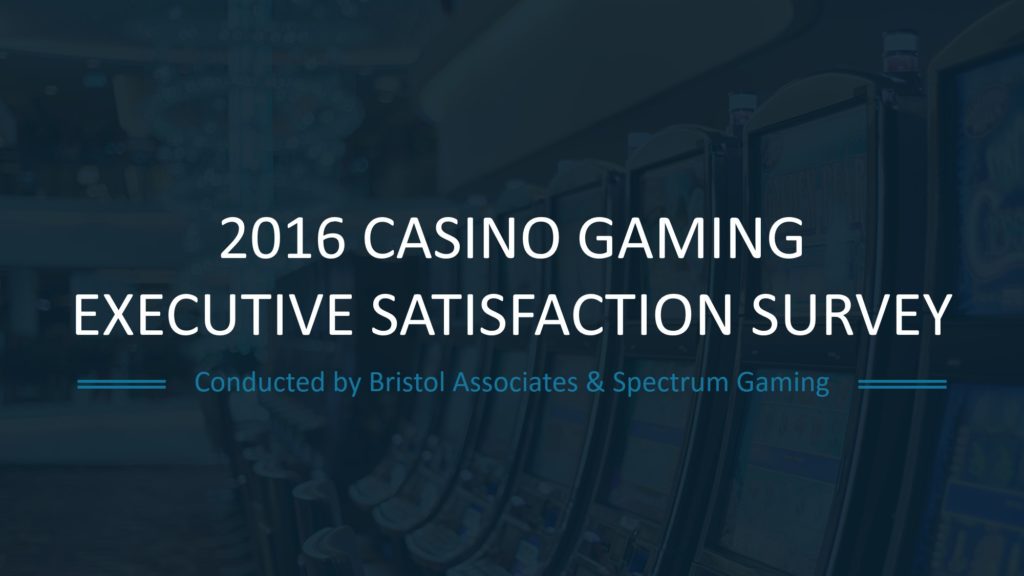 For 16 consecutive years, Bristol Associates and Spectrum Gaming Group have surveyed casino gaming executives from around the country about their career goals, job satisfaction, and outlook on the industry. The data we’ve gathered provides insight into the factors that are most important to executives when pursuing a new position and their perception of the casino gaming industry as a whole. This year we received over 1,300 responses—the highest number of participants in our survey since inception.

Where Do Gaming Executives Want to Work? 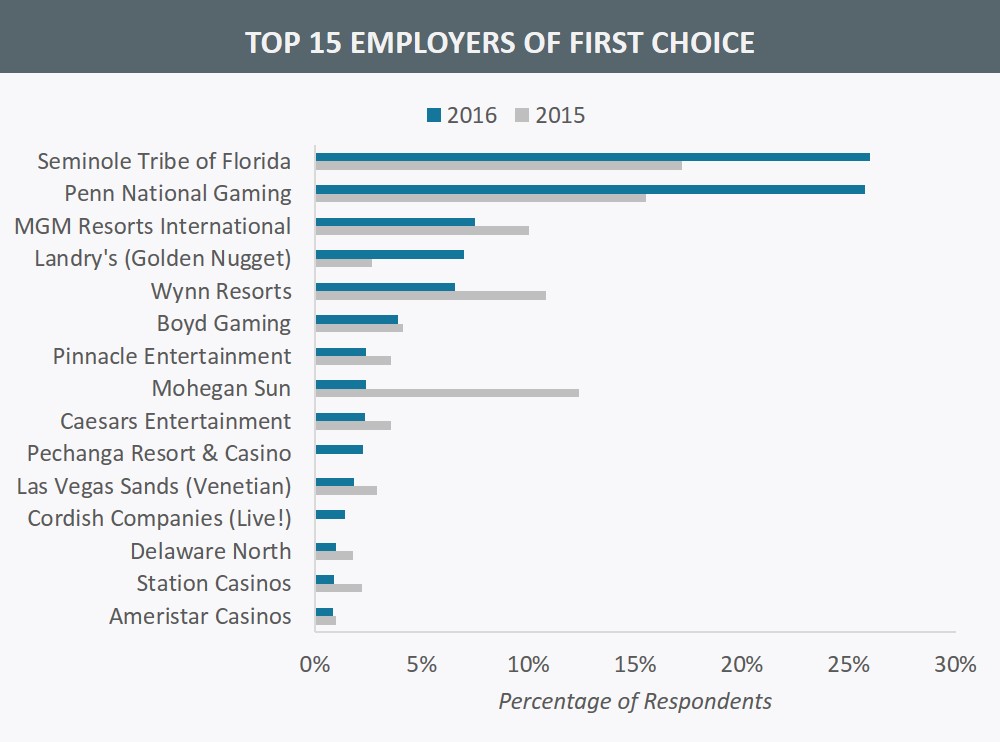 Are Executives Optimistic About Their Career?

Career optimism remains steady. When asked the degree to which they agreed or disagreed with the statement, “I am optimistic about the future of my career,” on average respondents fell in the range of “Somewhat Agree” to “ Agree.” This upwards trend has continued since career optimism reached its historical low in 2010. 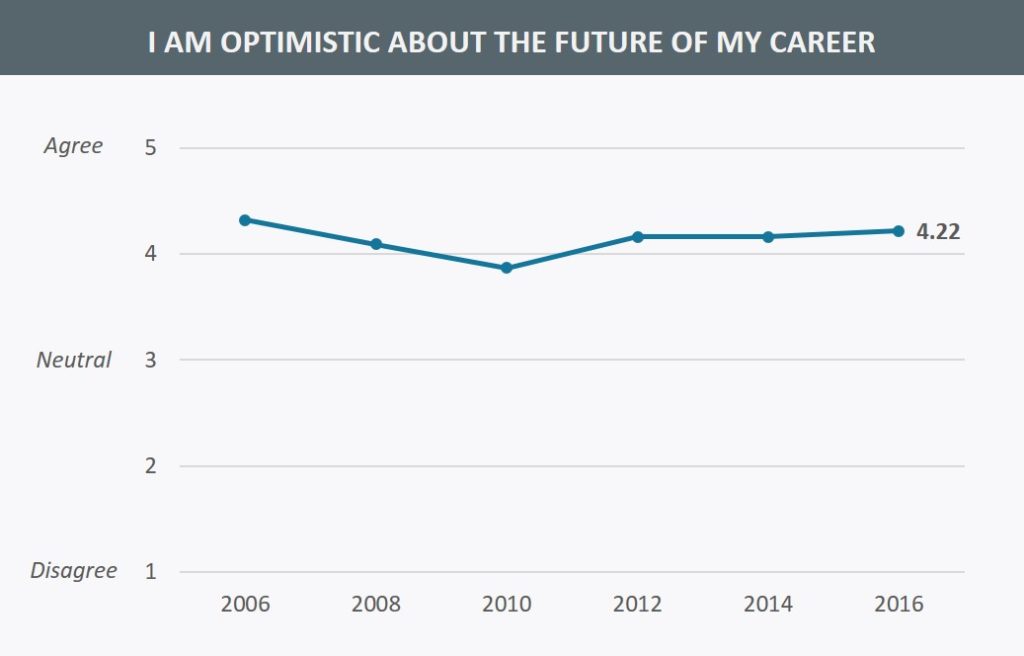 What Regions Are Executives Excited About?

With the exception of Atlantic City, every region has seen a decline in optimism year-over-year. When asked to what degree they agreed or disagreed with the statement, “[The Region] offers opportunities for career advancement,” on average, respondents perceived Las Vegas as having the most opportunities with an average score of 3.48—representing a response between “Neutral” and “Somewhat Agree.” 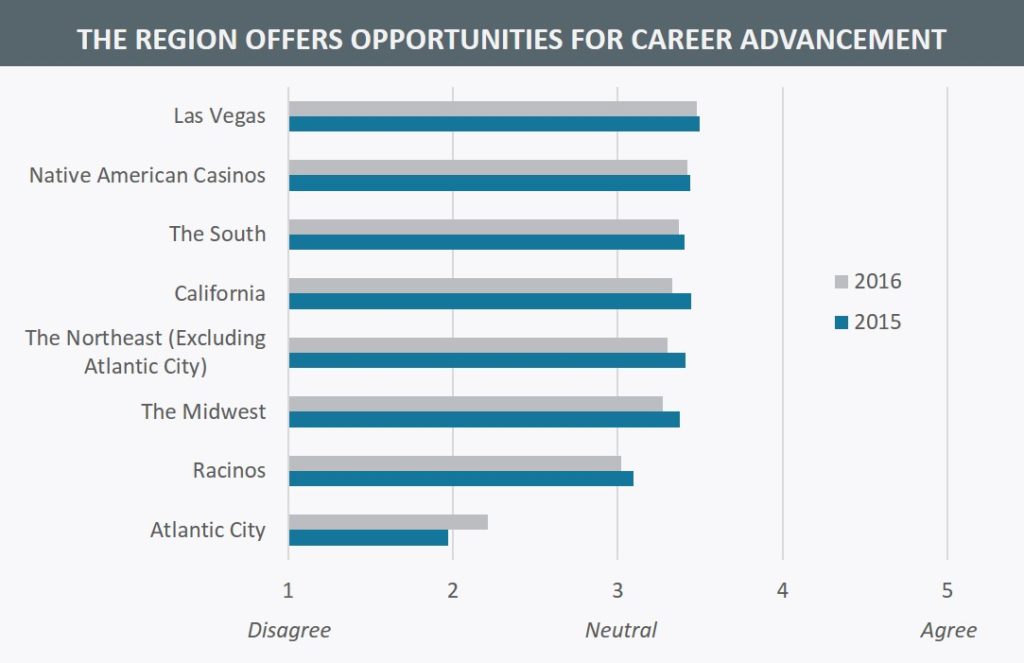 How Does Tenure Affect Job Satisfaction?

Executives have a better opinion of their company earlier in their career. When asked how much they agreed that their company is working hard to keep staff, management, and them satisfied, respondents with 5 years or fewer of experience agreed with the statements more than any other group.

Across all groups, respondents agreed most that their company strives to keep its staff satisfied. This drops when asked the same question for management and for respondents personally.

What Factors Are Important in Considering New Opportunities?

We asked respondents to rank 5 common factors influencing a move to a new position in order of priority, where 5 reflects the highest priority. Respondents ranked “Compensation” as the most important factor, at an average score of 3.7, and “Career Opportunity” following at a close second at 3.5. The least important factor was “Weather and Lifestyle” with an average score of 2.6. 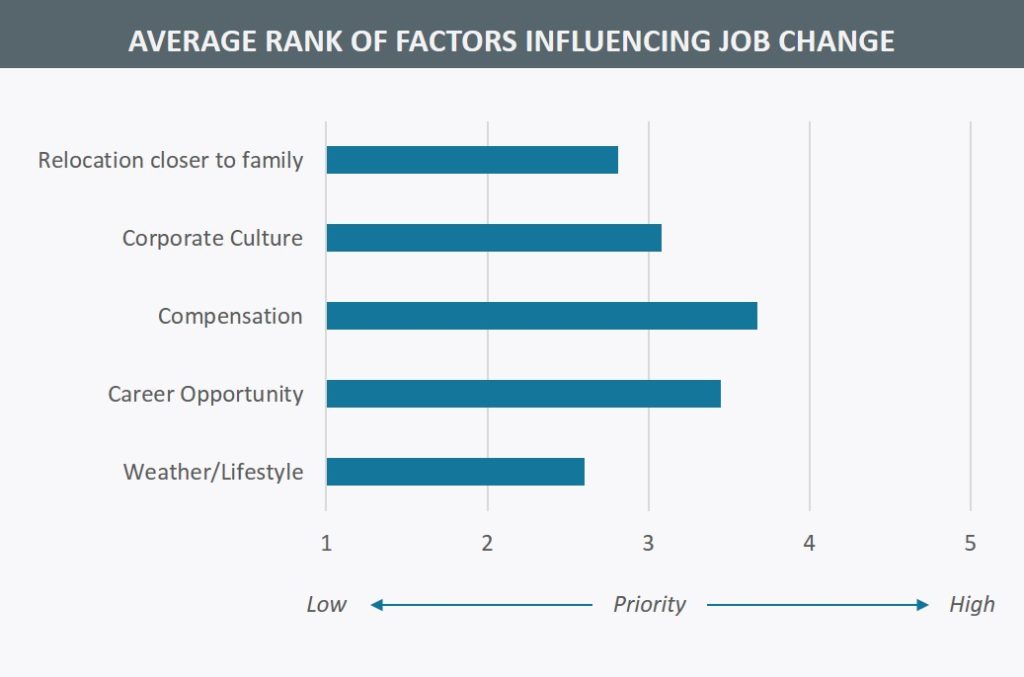 “The amount of job opportunities within the casino industry has increased as of late, however, the market is still extremely competitive. As a result, many of the executives we have placed this year have sacrificed weather and lifestyle in order to rise in the ranks and obtain a higher salary.”

The 2016 Casino Gaming Executive Satisfaction Survey by Bristol Associates and Spectrum Gaming was conducted online and had a total of 1,326 respondents. The participants represent a sampling of casino and gaming executives from across North America and are diverse in terms of geography, executive responsibilities, years of experience and other meaningful criteria. The survey was designed to ensure that the respondents have worked in the casino and gaming industry and that no one was surveyed more than once.